Expose your ideas and be creative – think like an entrepreneur

GrowUp Students is a growth competition and coaching process for higher education students' business ideas and operating businesses. Students can participate in the competition alone or as a team, in Finnish or English. Each participating higher education institution (SeAMK, VAMK, ​​TAMK and SAMK) organizes its own preliminary trainings and semifinals. 16 competitors will participate in the final at Seinäjoki University of Applied Sciences: three business ideas and one operating business from each university.

Registration by 31 January 2023 via this link

The student participates in GrowUp Students semifinal, which is arranged in their home university. In semifinal, the student pitches their idea for the jury. A total of twelve business ideas and four operating businesses continue from the semifinals to the finals.

1. Business ideas
As the name suggests, you can start the GrowUp Students business idea -category with just an idea. An idea can be a product or a service – practically anything that could be used to make a business.

The winner and runner-up of both categories will be awarded a cash prize.

GrowUp Students 2023 competition is organized by:

GrowUp Students originates from an SME growth competition Grow Up. Grow Up competition was arranged in South Ostrobothnia for several years and it was very successful. Instead of Finnish SMEs, GrowUp Students competition differs from its predecessor by letting higher education students test their business ideas and businesses. 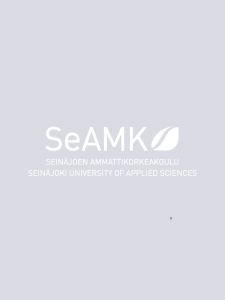 SeAMK Newsletter highlights our current education offering as well as events and news.

This website uses cookies to improve your experience while you navigate through the website. Out of these cookies, the cookies that are categorized as necessary are stored on your browser as they are essential for the working of basic functionalities of the website. We also use third-party cookies that help us analyze and understand how you use this website. These cookies will be stored in your browser only with your consent. You also have the option to opt-out of these cookies. But opting out of some of these cookies may have an effect on your browsing experience.
Necessary Always Enabled
Necessary cookies are absolutely essential for the website to function properly. This category only includes cookies that ensures basic functionalities and security features of the website. These cookies do not store any personal information.
Non Necessary
Any cookies that may not be particularly necessary for the website to function and is used specifically to collect user personal data via analytics, ads, other embedded contents are termed as non-necessary cookies. It is mandatory to procure user consent prior to running these cookies on your website.
Uncategorized
Undefined cookies are those that are being analyzed and have not been classified into a category as yet.
Advertisement
Advertisement cookies are used to provide visitors with relevant ads and marketing campaigns. These cookies track visitors across websites and collect information to provide customized ads.
Analytics
Analytical cookies are used to understand how visitors interact with the website. These cookies help provide information on metrics the number of visitors, bounce rate, traffic source, etc.
Performance
Performance cookies are used to understand and analyze the key performance indexes of the website which helps in delivering a better user experience for the visitors.
Others
Other uncategorized cookies are those that are being analyzed and have not been classified into a category as yet.
Save & Accept
Powered by